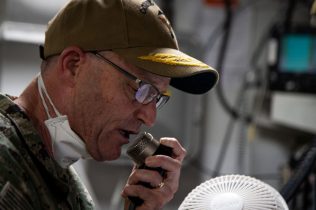 TOKYO (Reuters) – A senior U.S. Navy commander in Asia on Thursday welcomed an agreement by Japan and Australia to tighten military cooperation that will bolster the United States in a region where China’s influence is growing.

Japanese Prime Minister Yoshihide Suga and Australian leader Scott Morrison on Tuesday agreed in principle on a Reciprocal Access Agreement (RAA) that will more closely align the U.S. allies through a legal framework allowing each other’s troops to visit for training and to conduct joint military operations.

“That kind of agreement is really helpful and encouraging to everybody in the region. We are very supportive of that agreement and we look forward to exercising along right with them,” Vice Admiral William Merz, commander of the U.S. Navy’s Seventh Fleet, which is headquartered in Japan, said during a roundtable briefing.

The agreement between Canberra and Tokyo, Japan’s first with another country since a similar agreement with Washington in 1960, comes as the two countries work more closely with the United States and India as part of an informal grouping known as the “Quad” as they grow more concerned about Chinese activity in the South China Sea and East China Sea.

Suga hosted foreign ministers from the Quad in Tokyo last month before heading to Vietnam and Indonesia to deepen ties with key Southeast Asian nations.

Merz, who spoke with Lieutenant General H. Stacy Clardy, the commanding general of III Marine Expeditionary Force in Okinawa, said greater cooperation in the region is not aimed at China.

“There is no attempt to contain China or anyone else, we are trying to create an environment of inclusion,” he said.

Beijing, which says its intentions in the region are peaceful, has described the Quad as a “mini-NATO.

The North Atlantic Treaty Organization (NATO) was formed to provide collective security against the then Soviet Union and is still seen as a threat by Russia as it expands to include some European states that were formerly part of the Eastern Bloc.

The Japan-Australia agreement also came under similar criticism in China on Tuesday, with the state-backed newspaper the Global Times saying the United States “is using its two anchors in the Asia-Pacific region to push forward the construction of an Asian version of NATO.”

WATCH: Gov. Cuomo Flips Out on Reporter and Says Schools Won’t Be Closing — Minutes Later Mayor de Blasio Announces That They Are

“America Is Dead” – Joe Biden Actually Said This At...