WASHINGTON, D.C. — Thousands attended a rally in Washington, D.C., on Saturday to express support for President Donald Trump, who showed up to drive through the crowd near the White House in the presidential motorcade.

Trump supporters waving Trump 2020 flags and signs demanding “Stop the Steal” marched from the Freedom Plaza near the White House down Pennsylvania Avenue to the Supreme Court building, protesting what many of them believe is a stolen election.

“I wanted to show my support for the president and make an effort to maximize the voice of those who believe that there are serious questions yet to be answered about the veracity of the results of this election,” one attendee said, who came up from North Carolina and spoke to The Daily Wire on condition of anonymity because he is active-duty military.

“President Trump just drove right by us outside — thumbs up all the way,” tweeted journalist Tracy Beanz, appended to her tweet a picture of MAGA hat-sporting Trump flashing a smile from his car. “It was INCREDIBLE. Already thousands of people gathering for the event! STAND UP FOR ELECTION INTEGRITY!”

Attendees also broke out at one point into a rendition of “The Star-Spangled Banner.”

Trump supporters sing the national anthem in unison as they march in D.C. pic.twitter.com/BfXeMVtdUf

Trump himself tweeted out his support for the rallygoers, disseminating a video of them and writing, “Hundreds of thousands of people showing their support in D.C. They will not stand for a Rigged and Corrupt Election!”

Hundreds of thousands of people showing their support in D.C. They will not stand for a Rigged and Corrupt Election! https://t.co/tr35WKTKM8

The Trump campaign has filed multiple lawsuits claiming widespread election irregularities. Thus far none of the alleged irregularities have been shown to be significant enough to alter the outcome of the election, while some of the claims have even been dismissed by various courts.

The event was mostly peaceful, though several arrests were made during the march, according to preliminary reports from the D.C. Police Department. Charges included four for firearm violations, two subjects for simple assault, one for no permit, one for assault on a police officer, and two subjects for affray/disorderly.

A scuffle also broke out among Trump supporters and black-clad left-wing protesters, according to the New York Post:

Black-clad members of the lefty group Refuse Fascism who tried to shove their way into the mass of Trump supporters got into a shouting match with them as speeches got underway. Punches were exchanged – with one Trump backer swinging a megaphone — as ralliers pushed the counter-protesters away from their group and toward police officers trying to keep order.

Marchers headed to a second rally site outside the Supreme Court, where a contingent of Antifa protesters waited behind a large hot-pink banner that read, “Punch MAGA in the Face.”

“We won!” the left-wing activists chanted.

But they were greatly outnumbered by the Trump supporters, who scolded them as “white privilege people over there talking all that trash” and struck up a derisive chant of “Check your privilege!”

Members of Antifa reportedly became more active as the sun went down, with journalist Andy Ngo recording some Trump supporters being reduced to tears as Antifa demonstrators harassed them.

A family with children are in tears as they are followed and harassed by antifa. #MillionMAGAMarch pic.twitter.com/Kb8f2sJ1e5

Antifa in DC are preparing for sunset with their riot gear. pic.twitter.com/DTJ4Yhaomp

WASHINGTON, D.C. — Thousands attended a rally in Washington, D.C., on Saturday to express support for President Donald Trump, who showed up to drive through the crowd near the White House in the presidential motorcade. Trump supporters waving Trump 2020 flags and signs demanding “Stop the Steal” marched from the Freedom Plaza near the White 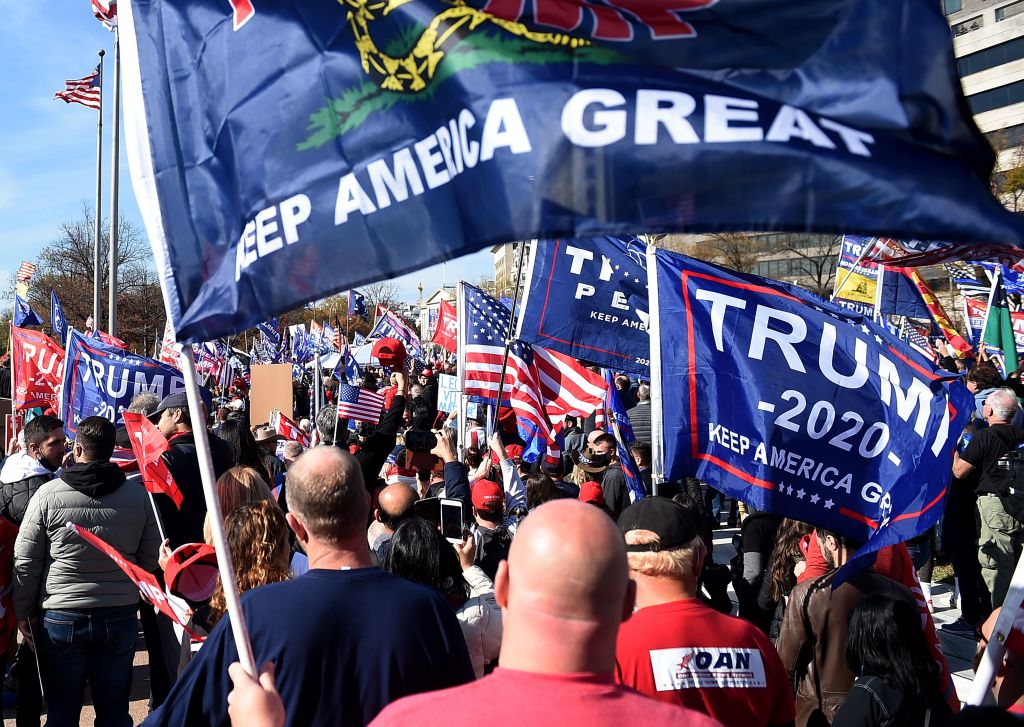 Ingraham: Beware of the ‘false prophets’ of a...

Nets Blackout Fauci Saying Kids Should Be in...

Hannity: We don’t need lectures from the ‘depraved’...

BREAKING: Joe Biden and Kamala Harris Claim They Are Receiving...