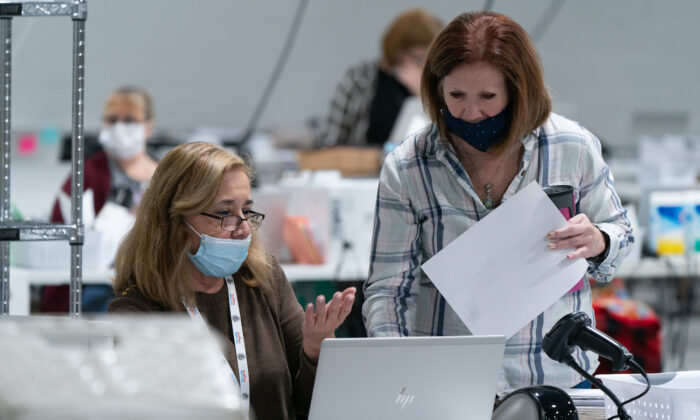 Election personnel sort ballots in preparation for an audit at the Gwinnett County Board of Voter Registrations and Elections offices in Lawrenceville, Ga., on Nov. 7, 2020. (Elijah Nouvelage/Getty Images)

A second Georgia county has uncovered thousands of votes that were not included in the election results.

The Georgia Secretary of State’s office said on Tuesday that 2,755 votes were uncovered in a memory card that were not included in the initial count for Fayette County.

The discovery was part of Georgia’s statewide audit involving a manual hand recount of nearly 5 million paper ballots in each of the state’s 159 counties.

The ballots found in Fayette County were scanned onto the memory card but did not get uploaded, said Gabriel Sterling, who manages the state’s election system for Secretary of State Brad Raffensperger, a Republican.

Of the votes, 1,577 were for President Donald Trump, 1,128 were for Democratic nominee Joe Biden, and the remainder included 43 for Libertarian presidential candidate Jo Jorgensen, and seven write-ins, Sterling said.

The newly discovered votes in Fayette County are not enough to flip the lead in the state from Biden to Trump, with the latest tally giving Trump a net gain of less than 449 votes. Biden now leads Trump by 12,929 votes in Georgia.

Fayette County is the second county in Georgia that has found uncounted ballots. Floyd County on Monday found 2,600 votes that were not initially tabulated in the initial vote counting process.

Sterling said that Fayette County’s votes were a more easy discovery compared to Floyd County, because they were able to see that the number of people who were checked in on the early voting file exceeded the number in the county’s reported total votes.

Both Floyd and Fayette counties will still need to recertify their results, and that can’t be done until after the state’s election audit is complete on Wednesday at midnight, Sterling said.

China Insider: Sociologist: ‘The Attempt to Influence US Election Is...